Peace and Nonviolence
It’s not just the freedom of one man at stake, but our very freedom of speech.

From the stage Stella Morris, Julian Assange's wife, and the investigative journalist Stefania Maurizi will urge the journalists present to defend the founder of Wikileaks. While outside the hall, a group of FREE ASSANGE Italia activists will tell journalists that their freedom is also at stake.
9 April 2022
Patrick Boylan 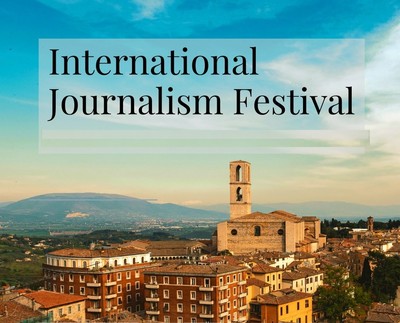 International Journalism Festival in Perugia
Author: International Journalism Festival in Perugia
Source: https://mobile.twitter.com/journalismfest
Close
Julian Assange, the Australian investigative journalist who revealed US war crimes in Afghanistan and Iraq and who has been imprisoned in London for the past three years, is definitely a problem for mainstream journalism. The U.S. government, which wants to extradite Assange and imprison him for up to 175 years, has long pressured major Western news outlets to stop covering the case and this has seemingly left many journalists with no choice but to look the other way.

(Likewise, Washington has also put pressure on the International Criminal Court not to investigate the possible crimes of U.S. soldiers in Afghanistan and Iraq.)

Thus, a near-perfect press silence reigns, just as an unreported judicial enormity is taking place, namely the de facto acceptance of U.S. judicial interventions, worldwide, to silence “trouble-making” journalists. No matter the nationality of those journalists or the country in which they operate, the United States will feel authorized in the future, invoking the Assange case, to nab them and bring them back to one of Uncle Sam’s jails, even for life. It is easy to imagine the intimidating effect this will have on all journalists.

To break this dangerous press silence, the 16th edition of the International Journalism Festival (in Perugia, from April 6 to April 19) has bravely scheduled a featured event on "Assange and WikiLeaks: freedom of the press on trial." Stella Morris, lawyer and wife of the founder of WikiLeaks, investigative journalist Stefania Maurizi (of Il Fatto Quotidiano and, in the past, Espresso and La Repubblica) and Joseph Farrell, worldwide ambassador of the WikiLeaks site, will be speaking.

The featured event will be today (Saturday, April 9) at 4 p.m. at the San Francesco al Prato auditorium.

The 600 journalists participating in the Festival will also be "cornered" outside the hall by activists of FREE ASSANGE Italy who will deliver them a passionate plea to break the press silence on the Assange case when they return to their respective newspapers.

"We need to let the readers of every newspaper know," say the activists, “that, with the judicial persecution of Julian Assange, freedom of expression and of the press are also at jeopardy."

Here is the text of their appeal:

we have come to your International Journalism Festival to tell you about the plight of one of your colleagues, locked up in a maximum security prison just for doing his job as an investigative reporter, exposing the wrongdoings and dirty secrets of governments and powerful people.
We are talking, of course, about Julian Assange.

In these tremendous days, filled with images of destruction, death and despair in Ukraine, we see you all intent on denouncing massacres and war crimes. The very thing that Julian Assange has dedicated his life to exposing and castigating.

With a difference, however. You unveil and castigate the war crimes of Russia, a country that the U.S. government has qualified as an "enemy". Yours is therefore journalistic work "in the service of truth", as you like to proclaim – except that it is a very convenient truth.

Assange, on the other hand, has exposed and castigated NATO's war crimes in Afghanistan and Iraq – the ones that the U.S. government wants covered up and which not even the International Criminal Court is to investigate. Julian's journalistic work, then, is, like yours, "in the service of truth" – except that it is a very inconvenient truth.

So inconvenient that the U.S. Department of Justice considers the dissemination of those truths worthy of up to 175 years in prison under the provisions of the Espionage Act of 1917.

But where were you, then? Where were you while Julian Assange was exposing the war crimes committed by the West in Afghanistan and Iraq?

We did not see the diligence and indignation that you so readily show today in lambasting Russia, when it was us (the good guys, the lovers of democracy) who were committing the atrocities. We did not see any live broadcasts or marathon news shows exposing the horrors that we and our allies were committing in Afghanistan, Iraq or Libya, and which we are committing today in Syria, Palestine, Yemen, and the Sahel.

With one exception. We saw an Australian journalist who, almost single-handedly, dared to bring these horrors to public attention, bring them into the light of day. Even if those crimes – including acts of torture that makes one nauseous just hearing about them – were committed by us, the good guys. This Australian journalist even built an ingenious web site, Wikileaks, in order to anonymously gather evidence of the crimes he reported. And that is why this journalist is being persecuted, by the United States, since 2010, when he first published the famous video "Collateral Murder", that macabre video game.

Since 2012 Assange has been deprived of his freedom and since April 11, 2019, he is locked up awaiting trial in a maximum security prison, intended for perpetrators of heinous crimes, where he undergoes the torture denounced by UN rapporteur Nils Melzer and more than 60 medical experts in torture.

And you? Which side are you on?

After having drawn heavily from his revelations for your scoops, at least at first, can you not utter a single word today in defense of Julian Assange? After having contributed to the mud-slinging, demolishing him in the eyes of public opinion, can you not spend a single word today to rehabilitate him? For example, by informing your readers – who may have read your articles accusing Assange of rape – that it was all a lie and the case has been closed?

Can't you tell your readers about the CIA's plan to kidnap or kill Assange, as revealed by Yahoo News? And condemn his probable extradition to the very country that planned to assassinate him?

Aren't these "relevant facts"? Don’t you feel an obligation to tell your readers about them, out of respect for your profession?

This coming April 20th, the British Minister of the Interior, Priti Patel, will find on her desk the court order allowing the extradition of Assange to the United States, where he is likely to be sentenced to up to 175 years in prison: he will no longer be able to see his family or his lawyers, in practice he will be buried alive. A colleague of yours, buried alive for doing his job as an investigative journalist: doesn't this thought trouble you in any way?

It is high time for you to stand up for Julian and demand his release. You owe it to us, to all the citizens of today and tomorrow, because if Julian Assange is extradited or if he dies in prison beforehand, it will be the death of free information too, the death of our #RightToKnow what those who govern us have really done, in order to be able to hold them accountable.

One last word. If Julian is not set free, you will not be free either. If tomorrow some whistleblower gives you secret information revealing war crimes committed by a NATO country, remembering Julian you will most likely put it through the shredder and let possible criminals go unpunished. In a word, you will feel compelled to live a life of complicity.

It is therefore also for YOU and YOUR freedom as a journalist that we ask you to intervene actively in favor of the release of Julian Assange.