Last Thursday, activists of the RentStrike network organized an anti-eviction picket to save an elderly resident of Rome, victim of an irregular lease, from a life of homelessness, thanks to an appeal to the UN High Commissioner for Human Rights. They had done so in May for a similar case.
16 July 2021
Patrick Boylan 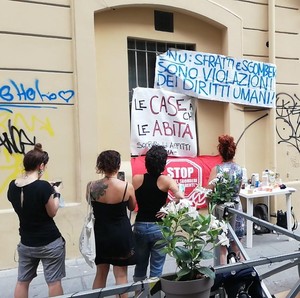 Anti-eviction picket in Rome at Via dei Sabelli no. 19, San Lorenzo district, on July 8, 2021.
Author: Stefano Portelli
Close
The facts: Last Thursday (8.7.2021) activists of the RentStrike movement (see here and here) managed to temporarily save from eviction an elderly resident of Rome's San Lorenzo neighborhood, who was at risk of becoming homeless under the scorching summer sun. To defend him, they appealed to a UN Committee little known in Italy, the CESCR (see here and here), created to ensure respect for the treaties on economic and social rights signed by member states. The bailiff, who appeared at half past nine in front of the elderly man's home, postponed the eviction until next September 20.

Background: Although appeals to the CESCR are frequent in Spain (see here), where they have saved dozens of vulnerable individuals from eviction, RentStrike-Roma's appeal to the CESCR's Geneva office was only the second attempt in Italy to use this new tool to defend the right to housing. "But we want to set an example," commented one of the organizers of the picket last Thursday. "Times are changing. Today we have to defend the vulnerable from eviction by every means available."

Things were different a few years ago: to prevent evictions in the left-leaning San Lorenzo district of Rome, residents would fill the street in front of the homes of those in danger of eviction, to physically prevent the police from getting in – sometimes even fighting would break out. Last Thursday, though, it was different: to defend the elderly San Lorenzo resident from eviction, only a dozen activists turned up and they were armed, not with cobblestones to throw at the police, but with international law documents to cite to the bailiff. Times have changed, indeed!

In the last twenty years, in fact, the San Lorenzo neighborhood – like many other once working-class metropolitan areas in Italy – has changed considerably, both demographically and sociologically. As a consequence, the way the neighborhood now stands up against injustices – and the ethos this expresses – have changed as well.

On the one hand, the neighborhood has begun to "gentrify": the upper middle class has begun to colonize it, building luxury residences in place of the old council houses and factories and thereby driving up prices in the stores – to the point where many long-time residents have begun to migrate elsewhere.

But the neighborhood's gentrification also has endemic causes. Many of the very working-class families now contribute to the "studentification" and "touristification" of San Lorenzo by turning their family apartments into mini hostels, to exploit students, or bed-and-breakfasts, to exploit tourists. This structural change – the exploited who turn into exploiters – inevitably causes superstructural changes in mindset of the whole neighborhood. There is less solidarity; individualism predominates. Last Thursday, there were only two or three San Lorenzo residents present at the picket against the eviction; the other activists present had come out of solidarity from the neighborhoods nearby, Pigneto and especially Tor Pignattara, which have remained more working-class.

But let's look more closely at the phenomenon of “studentification” and the damage it has caused to the social fabric, not only in San Lorenzo but elsewhere as well. (As for the phenomenon of “touristification”, see here e here.) This excursus will help us better understand, then, why that elderly San Lorenzo man ended up under eviction and what is the illegality that the UN body has been called on to rectify.

San Lorenzo is a university district like so many others in Italy where – due to a precise, albeit unconfessed, choice by Italian policymakers not to help children from lower-class families get a higher education – there is a lack of low-cost student dorms adjacent to the various local universities. This jeopardizes lower-class students who cannot live at home (because they come from out-of-State or out-of-town) and do not have the financial resources to rent an apartment on their own or apply for a room in one of the luxurious private student residences such as the Student Hotel now under construction in San Lorenzo. So, in order to satisfy their demand for temporary housing, many San Lorenzo families have transformed their apartments into mini-hostels, accommodating two or three young people per room and charging them high rates (albeit lower than those of the luxury private residences). The law, in fact, allows a landlord to offer temporary leases to students, revocable annually, and also allows them to charge higher rents than those reserved for families, which in Italy are negotiated by the tenants' union.

But that’s just the beginning. Many apartment owners have started to impose these "temporary contracts for students" on people who are not students at all and are seeking to rent an apartment indefinitely as their home. Imposing temporary contracts on this category of tenant is completely illegal but widespread and enables apartment owners not only to ask for exorbitant rents, but also to raise them annually at each expiry date and to terminate the contract if the tenant balks. The tenant, in practice, has no rights.

The abusive rentals business is so widespread in San Lorenzo that a significant number of people there, once proud of their anti-fascist and anti-capitalist traditions, now exhibit the avid and mistrusting mentality of stereotypical landlords – the very mentality that, as rebellious young students, they perhaps used to contest. We are what we eat but – even more – we are as we earn our living. “The function makes the organ,” as Lamarck said. Of course, there are exceptions: some apartment owners treat their student tenants or Airbnb guests as members of the family – especially those landlords who have bought multiple apartments as a hedge against inflation, not to make money.

The case: The elderly gentleman saved from eviction last Thursday falls into the category, just described, of tenants exploited by a landlord who, by means of illegal "transitory contracts", deprives them of their rights and fleeces them with exorbitant rents subject to annual increases and no safeguards.

Three years ago, Carlos, a 67-year-old single photography instructor, needed a bigger house: his mother had contracted Alzheimer's disease and Carlos wanted her to come live with him so he could care for her. He accepted the "transitory contract" offered by a landlord on Via dei Sabelli, in the heart of San Lorenzo. He knew that, by choosing to take care of his mother, he would be able to work (and earn) much less than before, but he was counting, in order to pay the exorbitant rent, on the subsidy provided by the State for assistance to incapacitated family members.

His mother died just before the outbreak of the pandemic and so State assistance was terminated. The photography schools where he taught closed down during the pandemic and so Carlos found himself without an income. He did not qualify for the government "pandemic handouts". Nor could he claim the pandemic “rent relief": it was not available to tenants with a transitory lease. The same for the law freezing evictions – it did not apply to transitory leases either.

Thus, more than a year ago, with no income and no protection from the State, Carlos found himself unable to pay his rent (€750 per month). His landlord’s reaction was immediate: he cut off the electricity and gas since the utilities were in his name. Carlos was unable to request electricity and gas on his own because utility companies demand proof of a long-term contract. This all means that, for the past year, Carlos has been living without electricity, without hot water, without heating (during winter) and without the Internet, which has prevented him from giving online photography lessons.

The judge who decided his eviction on November 30, 2020 did not take into consideration the irregularity of Carlos' lease or the damaging consequences resulting from that irregularity, as explained above. Nor could the judge take these things into consideration: Carlos' lawyer – assigned to him ex officio by the Court, being indigent – did not mention these things in his perfunctory defense brief. Indeed, the lawyer did not even show up at the hearing and, after the trial, did not appeal. The judgment, therefore, automatically became final. Carlos was literally about to end up on the sidewalk.

The appeal to the UN: The CESCR was established by the UN precisely to put an end, in its member states, to cases like Carlos' – cases in which fundamental human rights, enshrined in international treaties signed by those states, are denied in the absence of adequate norms to protect them, or because existing norms are too difficult to apply or are too easily disregarded or circumvented.

Incidentally, it should be noted that CESCR's scope of action includes not only the protection of the right to housing, but the protection of all rights. For example, in 2015, CESCR ordered Italy to combat gender stereotypes and gender inequalities (see here) because they harm the right to equality between citizens. In defense of the right to health, it denounced Italy for excessively cutting its health budget in the context of austerity measures (see here) and for allowing the ILVA steel plant in Taranto to continue emitting carcinogenic fumes (see here).

In the case of the elderly San Lorenzo gentleman that last Thursday’s anti-eviction presidium momentarily saved from life on the street, it is still unclear whether the CESCR will take up his case. This is, in fact, only the second time in Italy that RentStrike activists have attempted this course of action. But already their first appeal to CESCR has had initial success: on May 27th, the UN intervened on behalf of a resident of the Tor Pignatara neighborhood in Rome, under eviction due to an illegal contract, ordering the Italian authorities to "suspend the eviction from the apartment where she is currently living, or to provide an alternative accommodation adequate to her needs" while her case is examined.

In addition to appealing to the CESCR, Carlos is finally taking steps to unblock his pension application. The rubber wall of bureaucracy had thrown him into a depressive state of resignation and he had given up trying. Now he has regained hope of getting the pension he is in theory entitled to; this would enable him finally to vacate the apartment he now occupies out of necessity and to move into a smaller but more affordable one – with electricity and gas!

"Whatever happens – insists the RentStrike activist – learning to fight for his rights has been a game changer! Carlos has regained confidence in himself and in life and that is already no small victory. Standing up to injustice pays off."