US set to discontinue depleted uranium in medium calibre ammunition

It has emerged that the United States is seeking alternatives to depleted uranium for the future development and production of medium calibre bullets for its armed forces, although US government sources have declined to confirm the reasons behind the decision.
15 January 2010
Dave Cullen
Source: ICBUW (International Coalition to Ban Uranium Weapons)

The dramatic change in policy will affect the future development of 25 mm and 30 mm rounds, which at present are used in the Bradley Fighting Vehicle and the A-10 Thunderbolt Aircraft. The A10 Thunderbolt was responsible for the majority of depleted uranium contamination in Iraq, and almost all the contamination in the Balkans.

ICBUW has confirmed with Maneuver Ammunition Systems - the US government body which manages ammunition procurement for the US military - that a strategic decision has been made to move away from uranium in medium calibre rounds. To this end, a $2 million clean-up programme of the facility used to test fire the 25mm M919 DU round for Bradley vehicles is nearing completion. However, another range has been retained for future testing of the 30mm PGU-14/B DU round, which is used in the A10 Thunderbolt.

Any site in the US where radioactive materials are present needs to obtain a Radioactive Material Handling License, usually from the State Government. For ranges where uranium rounds can be tested, licenses are significantly more difficult to obtain than those for handling or manufacturing ammunition. It is not clear whether the capability now remains for either round to be manufactured, or whether the US is confident that it has sufficient stockpiles of them to cover its future requirements. Whatever the answer, the clean-up makes further development of uranium rounds considerably less likely.

Systems were not willing to single out a single reason for the policy change, but indicated that environmental considerations were a factor, alongside more prosaic issues such as the penetrating capability of uranium, and the precautions that must be taken when manufacturing uranium weapons. Under the site license for the M919 range, there was a requirement to commence clean-up by a certain date. A number of privately owned sites previously involved in the manufacture of uranium weapons have failed to be decontaminated by their owners leaving the considerable cost of decontamination to the US taxpayer.

There is little information in the public domain about how well uranium penetrators perform against penetrators made from other materials, but it may be that any difference was outweighed by the costs and difficulties associated with opening and running a new facility for manufacturing uranium rounds. However, the global campaign against uranium weapons will certainly have been one of the factors under consideration. In May 2008, the US Army Environmental Policy Unit recommended an acceleration in the development of alternatives to uranium and predicted increased political pressure over the issue. As well as the obvious opposition of countries affected by uranium weapons, a number of allies object to their use in joint operations, and for these reasons US forces restrict their use in certain theatres.

However, there is no room for complacency. Although this development is undoubtedly positive, it is impossible to predict whether the change could be reversed under different circumstances. The US remains fully committed to uranium in large calibre 120 mm rounds – in March 2009 it solicited bids for the production and development of the M829E4, the 4th version of the armour-piercing round for the Abrams tank, with the stipulation that the penetrator was to be made of uranium. Furthermore the M919 and PGU-14/B are likely to remain in the US arsenal for several years. 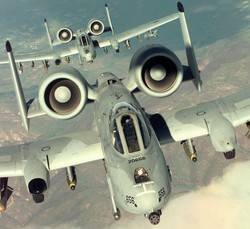 The PGU-14/B is standard ammunition for the A-10, usually used in a ratio of 5-1 in concert with the PGU-13/B high explosive round. Under current US Air Force plans, the A-10 is due to be replaced by the F-35 Joint Strike Fighter, which will be equipped with a new 25 mm round. The timetable for this change is not settled, and the suitability of the replacement is questioned in some quarters. As such, development of the ammunition for the F-35 is at an early stage, but Maneuver Ammunition Systems have confirmed that it is intended to be made of an alternative material, and that a decision has been taken to discontinue using uranium penetrators in medium calibre rounds. Overseas partners in the F35 project have previously expressed concerns over the proposed use of uranium in the ammunition for its main cannon and have sought permission to develop alternatives for domestic use. 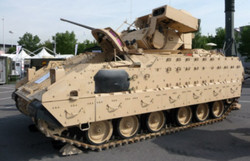 It is not clear at this stage whether a non-uranium armour piercing round will be put into service for the Bradley Fighting Vehicle. There are no plans to replace the Bradley as yet, and the Federal Budget for 2010 puts aside $526 million for upgrading 353 Bradleys. At present the M242 gun on the Bradley can fire both the M919 and the M792 high explosive round, switching between the two with a simple mechanism. Several tungsten-based armour-piercing rounds are also available at this calibre, and it may be that one of these is brought in to replace the M919.

Despite these uncertainties, the long-term implications of this change are profound. The A-10 in particular, was responsible for 232 tonnes of the uranium fired in the 1991 Gulf War, and all of the incidences of it being used in the Balkans; it has also been deployed in Afghanistan. When the M919 and PGU-14/B are eventually removed from service, uranium in kinetic energy rounds will be restricted to the large guns in main battle tanks. Furthermore, the choice by the most vociferous user of uranium weapons to switch to alternative materials shows that claims of the unique penetrating power of uranium are overblown. ICBUW will continue to challenge these claims, and to campaign for a complete international treaty ban on the use of uranium in all conventional weapons.