Peace and Nonviolence
The Pentagon’s long hand behind events in Ukraine?

A U.S. rally calls for peace in Ukraine by halting NATO expansion

Today, an impressive march for peace, starting in Times Square and ending with a packed rally at the nearby People’s Forum, called for ending NATO intervention in Ukraine as the key to stopping hostilities there. The slogan for the event says it all:
NATO EXPANSION – NO! || PEACE IN UKRAINE – YES!
15 January 2023
Patrick Boylan

Claudia De La Cruz of the People’s Forum, Medea Benjamin of Code Pink and Brian Becker of the Answer Coation, representing the main organizing groups, followed by Joao Pedro Stedile of the Brazilian Landless Workers’ Movement, kicked off the Forum discussion denouncing NATO ‘s (and thus the Pentagon's)  “long hand” behind the current bloodbath in Ukraine.

Many speakers also evoked the memory of Martin Luther King on the eve of his birthday, the 15th of January.

Taking a page from Stedile's activist methods, La Cruz concluded the rally by telling everyone present not to leave without having made at least one new friend from among the other attendees.

To hear the presentations of all the speakers at the rally, click on the following link:

Today’s march and rally in New York City, on the anniversary of the birth of Martin Luther King, calls for an end to NATO expansion as the key to peace in Ukraine.

How will saying NO to NATO bring peace?

It will, because the war is NOT about Putin's desire for empire, even though that is how it has been painted. Instead, it is about NATO's (and Wall Street's) desire for empire. And that is something we Americans can act on – and thus achieve peace. But first we must face up to it.

NATO claims that Putin is just another Hitler, out to conquer the world. Well, maybe he'd like to, but he can't and knows he can't. So he certainly didn't attack Ukraine for THAT reason.

He attacked because NATO provoked him into war by preparing to expand right up to Russia's borders with Ukraine, including building sites for nuclear missiles impossible to stop at that short range.

In other words, he attacked because NATO took out a knife to hold to his throat.

How do you react to a bully (in this case, NATO) who holds a knife to your throat? Putin reacted by attacking -- an error (and a crime, under international law) that may doom Russia.

So the answer is NOT to respond to violence with violence.

In 1962, President Kennedy responded to the violence of the USSR's plans to install nuclear missiles in Cuba by threatening to start World War III. Had he done so, that, too, would have been a tragic error and a crime as well.

Fortunately, the USSR backed down and canceled its plans for installing its missiles so close to the U.S. (Also because the U.S. dismantled its missile site in Turkey.)

But NATO refuses to back down. It is beating the war drums, supposedly to help Ukraine reconquer Donbass and Crimea in the name of sovereignty (in reality, to be able to go ahead and install its missiles there).

In other words, NATO (i.e., Wall Street) wants to be able to hold a knife to Russia's throat, because this would force Russia to capitulate to EVERYTHING, or risk annihilation. “Everything” includes reinstating another Eltsin, to give away the country’s vast energy resources, grain production, etc.

(1.) You couldn't just stand there with a knife to your throat. And yet (2.) it would be a bad idea to react by attacking, because that would only make things worse.

Isn't there some third way out?

That's what the rally tomorrow will be saying. There IS a third way out. And, in the case of Ukraine, it's not to tell Putin to back down, since he can't: that would spell suicide not only for him but for his country as well.

The third way out is to tell NATO to back down, since it can and should.

NATO doesn't need to install its missiles on Russia's border with Ukraine, where they would be unstoppable. They're enough of a deterrent where they are now.

In addition, we know (from the offer to negotiate that Russia made BEFORE the invasion, in December 2021) that Putin will accept to make concessions. So letting Ukraine continue to stay out of NATO would not be a one-way street, NATO would get something in return (like the deal Kennedy brokered in 1962).

In other words, telling NATO to back down is not surrendering. NATO shouldn't have begun the provocation in the first place. It's simply "resetting" things back to where they were.

What all this means, then, is that there IS a possibility for peace and it lies in OUR hands. Because only WE can stop NATO’s (i.e., Wall Street’s) quest for ever more territory to put under its control.

Russia can't stop NATO, as we can see. China refuses to take sides. Europe either looks the other way (Austria, Ireland, etc.) or backs NATO by supplying weapons to feed the war in Ukraine (Italy, France, etc.). 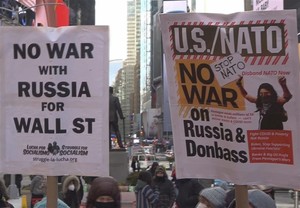 An anti-war demonstration in Times Square, New York City
Author: Tasnim News Agency
Source: Fonte: https://www.tasnimnews.com/en/news/2022/02/06/2657767/dozens-in-nyc-dc-protest-against-us-nato-war-mongering-video
Close
So that means that it is the American people who must stop NATO expansion. That is the ONLY road to peace.

To get back to our analogy, if you were Russia and a bully (NATO) puts a knife to your throat, your reaction should NOT be to attack him: that will only make things worse. The events in Ukraine demonstrate this.

Your reaction should be to call for help. To count on people around you stopping the bully. In the case of Russia, it should have called on the UN General Assembly.

What if no one intervenes? What if everyone refuses to take sides and looks the other way? What if the only person around is powerless to act to save you (like, in the case of Russia, the UN General Assembly: it has no power to stop NATO expansion).

Then you're doomed. But you would probably be doomed anyway if you chose to attack an armed aggressor. So you're better off at least attempting to call for help. Russia should have at least tried to get the UN to tell NATO to stop bullying it by expanding eastward.

Of course, if you had taken judo or other self defense courses, you might be able to disarm your assailant. Thus you would respond to violence, not with even greater violence, but by unbalancing your assailant using his impetus.

That's undoubtedly what Putin thought he could do. So he called his attack, not a war, but "a special operation" to disarm Ukraine, followed by an American-style regime change (i.e., bringing a “friendly” regime to power) to make sure it stayed disarmed. Putin apparently thought NATO’s insistent eastward impetus had overstretched it.

He was wrong. NATO had armed Ukraine so heavily and accurately from 2014 to 2022, that the Ukrainians were able to stop the Russian army in its tracks, retake parts of Donbass and start to attack Crimea and even Russia itself. Things just got worse for Russia.

Which means, in our analogy, that even if you (as Putin) did take judo courses and felt you could disarm any assailant (in this case, NATO-backed Ukraine), you might discover that your assailant was better prepared than you thought, a judo expert able to counter your moves and then knife you.

So even if you had studied judo, you'd be better off first calling for help. And resorting to judo only if no one responded. That’s what Putin should have done. Instead, he attacked. And now he’s paying for it.

The problem is, the poor Ukrainians are paying for it, too, and are calling out to us for help. And we SHOULD help them.

But “help” does not mean sending more arms.

In other words, we should not be listening to the propagandized Ukrainians who repeat the Pentagon line "More and more arms”, i.e. the ones who think they are getting themselves killed “for democracy” while in reality it is to let NATO test its new weapons and deplete Russia’s.

We should be listening to the OTHER Ukrainians, the ones the "democratic" government has not yet killed or put in jail for having called for peace. The ones who want Ukraine to stay out of NATO, in order to guarantee that peace.

(Our media don't mention it, but Ukraine has killed or "disappeared" 80 bloggers and journalists who dared to ask for peace and neutrality, calling them traitors. )

We should be listening to THEM, the brave Ukrainians not yet "disappeared", instead of the Pentagon stooges we see on TV all the time.

So the rally in Times Square today is a rally with a slogan that all of us can endorse along with all the peace loving Ukrainians not yet silenced by their government.

Let us do what the UN should do but is powerless to do, which is to stop NATO expansion eastward and thus bring peace to Ukraine.

We the people have the power.