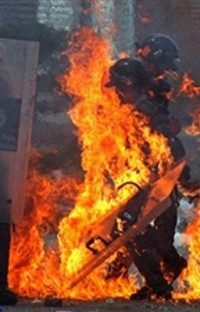 VENEZUELA-PROTEST-CLASHES A riot policeman is set on fire by a molotov cocktail thrown by a small group of anti-government protesters during clashes in San Cristobal, Venezuela on August 25, 2014. Detail of a photo by George Castellanos.
Autore: George CASTELLANOS/AFP/Getty Images
Fonte: http://www.gettyimages.it/detail/fotografie-di-cronaca/riot-policeman-is-set-on-fire-by-a-molotov-fotografie-di-cronaca/454145372#riot-policeman-is-set-on-fire-by-a-molotov-cocktail-thrown-by-a-small-
Chiudi

THE NOWAR NETWORK CONDEMNS THE MEDIA'S ONE-SIDED ATTACK
AGAINST THE VENEZUELAN GOVERNMENT AND ITS SILENCE OVER THE
TERRORIST PRACTICES OF THE RIGHT-WING VENEZUELAN OPPOSITION.

The mass media in practically every NATO country have, for months, dutifully reechoed the U.S. government's one-sided portrayal of the Venezuelan crisis. This portrayal aims at discrediting the left-wing Maduro government and ushering into power a right-wing opposition that does not hesitate to use terrorist violence to destabilize the country and seize control.

The events currently unfolding in Venezuela are clearly a repeat of the "soft coup" that the international media helped promote last year in Brazil.  Then, the media relentlessly backed calls to impeach the left-wing and anti-FMI President Dilma Rousseff on trumped-up charges and substitute her with the right-winger (and pro-FMI) Michel Temer, whose first act in office as President was to freeze all social spending and pay back the international debts that Rousseff had considered usury and thus illegal.

Now, a similar scenario is playing out in Venezuela.

Italy has shamelessly joined in the international media campaign to oust the Maduro government through declarations such as the one recently made by Matteo Renzi, the leader of the Partito Democratico (the party in power in Italy): Maduro, according to Renzi, “is destroying the liberty and well-being of his people who are dying not only from hunger but from all the [government] violence”. This gross misrepresentation of the facts was not challenged by any of the major national newspapers.

As for the current Italian Prime Minister, Paolo Gentiloni, he – along with the media in practically every NATO country – has not hesitated to denounce the “persecution” and arrest of the opposition leaders Ledesma and Lopez, while overlooking the fact that, in Italy or any other NATO country, these two individuals would have been jailed long ago for promoting acts of terrorism. Gentiloni apparently has not noticed the admission by Mike Pompeo, head of the CIA, that his agency is involved in the destabilization of Venezuela. Nor does Gentiloni seem to have noticed that it is the Venezuelan oligarchs, not grass roots organizations, that have been recruiting gangs to create havoc in the streets for over 100 days, burning down pro-government neighborhoods, attacking the police with fire bombs – on occasion with roadway bombs – and, in short, bringing the country to a standstill.

The only criticism that Gentiloni and the international media have made so far is of Maduro's supposed "attempt at creating a dictatorship" through the creation of a Constituent Assembly charged with rewriting the constitution, an Assembly elected by a large part of the population.  Indeed, even before the Assembly has convened to formulate changes to the Constitution (following the exact procedures which the Constitution itself has provided for), the U.S., Italy and other NATO countries have declared that they will refuse to recognize whatever document is produced.

Clearly the economic wars that the U.S. and the Venezuelan oligarchs have waged against the living conditions of the lower and middle classes in Venezuela, combined with a century of extractivism and declining oil prices, have left Venezuela in economic chaos. But as we can see from the case of Brazil (which suffers from similar economic chaos), one cannot, in South America, simply oust a left-wing social-spending government – and bring to power the right-wing opposition and their wealthy pro-austerity backers – and hope for greater economic stability.  Indeed, as Brazil has shown, this only leads to increased economic chaos and corruption -- certainly not to greater social justice and peace.

The NoWar Network in Rome therefore condemns the unilateralism of the Italian government and of the governments of the other NATO countries, as well as that of their mass media, who have chosen to dutifully join in the Washington-led campaign to destabilize Venezuela.

It should be remembered that NATO is the primary cause of wars and political instability in the world today, from Afghanistan to Libya to Syria to Ukraine – wherever a local government refuses to bow to the dictates of Washington.

Indeed, the NoWar Network wishes to express the debt of gratitude that we all owe to Venezuela and to the other countries of the Alba Alliance (Cuba, Bolivia, Nicaragua, Ecuador) in opposing over the years, in the General Assembly of the United Nations and elsewhere, the NATO wars of aggression and attempts at destabilization. Against the Axis of War, Venezuela, and the other four South American countries just mentioned, constitute a genuine Axis of Peace.