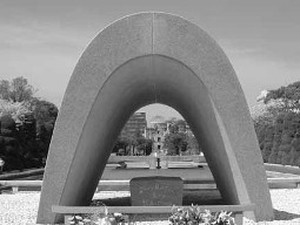 
Radiation, heat, blast and their synergetic effects created a hell on Earth. Sixty-one years later, the number of nations enamored of evil and enslaved by nuclear weapons is increasing. The human family stands at a crossroads. Will all nations be enslaved? Or will all nations be liberated? This choice poses another question. Is it acceptable for cities, and especially the innocent children who live in them, to be targeted by nuclear weapons?

The answer is crystal clear, and the past sixty-one years have shown us the path to liberation.

From a hell in which no one could have blamed them for choosing death, the hibakusha set forth toward life and the future. Living with injuries and illnesses eating away at body and mind, they have spoken persistently about their experiences. Refusing to bow before discrimination, slander, and scorn, they have warned continuously that "no one else should ever suffer as we did." Their voices, picked up by people of conscience the world over, are becoming a powerful mass chorus.

The keynote is, "The only role for nuclear weapons is to be abolished." And yet, the world's political leaders continue to ignore these voices. The International Court of Justice advisory opinion handed down ten years ago, born of the creative action of global civil society, should have been a highly effective tool for enlightening and guiding them toward the truth.

The Court found that "...the threat or use of nuclear weapons would generally be contrary to the rules of international law," and went on to declare, "There exists an obligation to pursue in good faith and bring to a conclusion negotiations leading to nuclear disarmament in all its aspects under strict and effective international control."

If the nuclear-weapon states had taken the lead and sought in good faith to fulfill this obligation, nuclear weapons would have been abolished already. Unfortunately, during the past ten years, most nations and most people have failed to confront this obligation head-on. Regretting that we have not done more, the City of Hiroshima, along with Mayors for Peace, whose member cities have increased to 1,403, is launching Phase II of our 2020 Vision Campaign. This phase includes the Good Faith Challenge, a campaign to promote the good-faith negotiations for nuclear disarmament called for in the ICJ advisory opinion, and a Cities Are Not Targets project demanding that nuclear-weapon states stop targeting cities for nuclear attack.

Nuclear weapons are illegal, immoral weapons designed to obliterate cities. Our goals are to reveal the delusions behind "nuclear deterrence theory" and the "nuclear umbrella," which hold cities hostage, and to protect, from a legal and moral standpoint, our citizens' right to life.

Taking the lead in this effort is the US Conference of Mayors, representing 1,139 American cities. At its national meeting this past June, the USCM adopted a resolution demanding that all nuclear-weapon states, including the United States, immediately cease all targeting of cities with nuclear weapons.

Cities and citizens of the world have a duty to release the lost sheep from the spell and liberate the world from nuclear weapons. The time has come for all of us to awaken and arise with a will that can penetrate rock and a passion that burns like fire.

I call on the Japanese government to advocate for the hibakusha and all citizens by conducting a global campaign that will forcefully insist that the nuclear-weapon states "negotiate in good faith for nuclear disarmament." To that end, I demand that the government respect the Peace Constitution of which we should be proud. I further request more generous, people-oriented assistance appropriate to the actual situations of the aging hibakusha, including those living overseas and those exposed in "black rain areas."

To console the many victims whose names remain unknown, this year for the first time we added the words, "Many Unknown" to the ledger of victims' names placed in the cenotaph. We humbly pray for the peaceful repose of the souls of all atomic bomb victims and a future of peace and harmony for the human family. 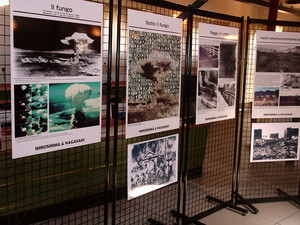