Somebody had a logo competition announcement, maybe people can send their ideas to a web-site..

Anyway, this one looks like the poor penguin is not really strong enough to hold up the world, and it's going to get squashed. Not a good, positive logo, in that respect..

Now, with penguins, (cuddly such), "contented" means it has either just gotten laid, or it's stuffed on herring. Take it from me, I'm an expert on penguins, those are really the only two options.

Now, working on that angle, we don't really want to be associated with a randy penguin (well, we do, but it's not politic, so we won't), so we should be looking at the "stuffed to its brim with herring" angle here. 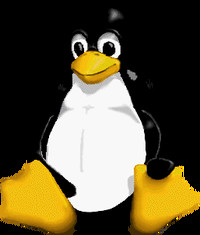 So when you think "penguin", you should be imagining a slighly overweight penguin (*), sitting down after having gorged itself, and having just burped. It's sitting there with a beatific smile - the world is a good place to be when you have just eaten a few gallons of raw fish and you can feel another "burp" coming.

(*) Not FAT, but you should be able to see that it's sitting down because it's really too stuffed to stand up. Think "bean bag" here.

Now, if you have problems associating yourself with something that gets off by eating raw fish, think "chocolate" or something, but you get the idea.

Ok, so we should be thinking of a lovable, cuddly, stuffed penguin sitting down after having gorged itself on herring. Still with me? 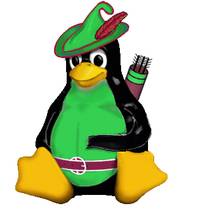 NOW comes the hard part. With this image firmly etched on your eyeballs, you then scetch a stylizied version of it. Not a lot of detail - just a black brush-type outline (you know the effect you get with a brush where the thickness of the line varies). THAT requires talent. Give people the outline, and they should say [ sickly sweet voice, babytalk almost ">"Ooh, what a cuddly penguin, I bet he is just _stuffed_ with herring", and small children will jump up and down and scream "mommy mommy, can I have one too?".

Then we can do a larger version with some more detail (maybe leaning against a globe of the world, but I don't think we really want to give any "macho penguin" image here about Atlas or anything). That more detailed version can spank billy-boy to tears for all I care, or play ice-hockey with the FreeBSD demon. But the simple, single penguin would be the logo, and the others would just be that cuddly penguin being used as an actor in some tableau.