In the city of Taranto THERE IS A HIGH RISK FOR PREGNANCIES. The italian National Health Institute has stated the presence of an "excess of mortality for some pathologic conditions of perinatal origin" of +45%.
5 luglio 2014
PeaceLink

In the Land of Fires (an area encompassing the italian Campania region around Naples) ISS (Istituto Superiore della Sanita’ - Nation Health Institute) has found an excess of mortality and risk for adults and an excess of hospitalizations for children.

The town of Taranto (as well as the above area) is facing serious difficulties for adults, in combination with an EVEN WORSE excess of mortality for children. 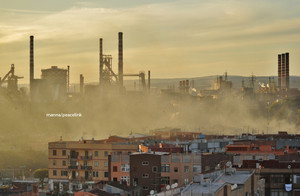 The one of Taranto’s children is a national emergency that has no equal
in Italy.

Epidemiological data WIDESPREAD AND COMMENTED OFFICIALLY YESTERDAY BY THE HIGHER INSTITUTE OF HEALTH '(ISS, through the updated “Sentieri” research) CONFIRM THE SERIOUS HEALTH SITUATION IN TARANTO PARTICULARLY WITH REGARD TO CHILDREN’S HEALTH.

PeaceLink will send a special report of these data to the European Union Commission in order to accelerate infringement proceedings for ILVA Steel Factory, applying Article 8.2 of Directive 75/2010 which contemplates the compulsory CUSTODY of any industrial plant which do not comply with the A.I.A. (Autorizzazione Integrata Ambientale - Environmental Integrated Authorization) in case of serious health problems due to environmental pollution.

In the city of Taranto THERE IS A HIGH RISK FOR PREGNANCIES. The italian National Health Institute has stated the presence of an "excess of mortality for some pathologic conditions of perinatal origin" of +45%.

"Perinatal" is the period before birth, from the 29th week of gestation and ending 7 days after delivery. It is therefore clear that there is current exposure to pollutants. As a consequence the theory of those who link the

disease only to the past collapses completely. WE DO ACCUSE THE PRESENT, THE POLLUTION WHICH IS NOW PRODUCED AND WHICH HAS BEEN SO NEGLIGENTLYMINIMIZED.

TARANTO IS A CURSE FOR CHILDREN because of the high incidence of all tumors in the range of 0 to 14 years, meaning a 54% of excess compared to the average regional rate, as stated yesterday in the press release by the National Institute Of Health.

And while officially we are breathing possibly the the best air in Italy, which we are questioning with our measurements (http://www.peacelink.it/ecologia/a/40322.html), ISS epidemiologists DO certify an infant mortality rate 21% higher than expected (group 0-14 years). In the first year of life only, the excess in mortality is of 20%.

Taranto and the Land of Fires are the symbol of the political failure of those who have so far ruled, exhibiting in recent years a mixture of indifference, cowardice and cynicism.

We will appeal against this failure in all possible European legal headquarters to have the right to life and health recognized as THE primary human right.

Not only: PeaceLink is collaborating with other organizations in order to enforce the new European NEC directive with even more strict fixed limits for the future air quality.