Environment
Ten million tons of CO2 each year, Ilva is the number one producer of CO2 in Italy

The Ilva steelworks (ArcelorMittal), located in Taranto, is the primary source, in Italy, of CO2 pollution of the atmosphere, with the two thermoelectric power plans (CET2 and CET3).
25 April 2021
PeaceLink 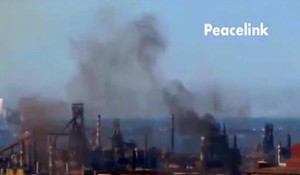 Close
The Ilva steelworks (ArcelorMittal), located in Taranto, is the primary source, in Italy, of CO2 pollution of the atmosphere.

This is the conclusion that the Italian eco-pacifist association PeaceLink has arrived at, after calculating all the sources of toxic emissions nationwide. This conclusion does not emerge clearly, however, from any of the official reports to date on Italian CO2 pollution.

Ilva is the number one producer of CO2 in Italy.  The two thermoelectric plants, in fact, release into the atmosphere an additional – and enormous – quantity of CO2, which should be included in calculating total emissions but which official statistics have, so far, simply ignored.

This immense pollution has no equal in all of Italy: the Taranto steelworks, in fact, releases into the atmosphere more than ten million tons of CO2 each year – if we include in this calculation, as we should, the emissions from the thermoelectric power plants built to keep Ilva running.

The data contained in the present letter are scientifically proven and serve to set the record straight regarding CO2 emissions from the entire steel production cycle.

EU EMISSIONS DATA THAT, BEING PARTIAL, ARE MISLEADING

The European Commission has recently published a list of the principal CO2 polluters in Europe, compiled on the basis of data furnished by member States.

But this last figure does not include the two thermoelectric power plans (CET2 and CET3) built to supply the energy requirements of the ArcelorMittal steelworks and which are part of the production process. 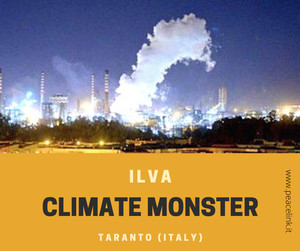 If we add the missing data from the CET2 and CET3 plants, the top polluter becomes:
1.    The ArcelorMittal steelworks in Taranto: more than 10.000.000 tons/year

This calculation also places the Taranto steelworks in the top ten “worse CO2 polluters” in the EU.

Why should the emissions from the CET2 and CET3 thermoelectric plants be included in the total figure for the pollution caused by Ilva?   It is because these plants supply electrical power to the Taranto steelworks by burning the gas produced in the steel-making process, which is piped directly to the two plants.  This process enables the plants to eliminate this waste and to satisfy Ilva's electrical power needs at zero cost to the company but, because of the plants' huge carbon footprint, at a very high cost to the environment.

THE “INVISIBLE” DATA FOR CO2 EMISSIONS

What follows are the official data taken from the web pages of the two thermoelectric power plants, CET2 and CET3 (http://www.taranto-energia.it):

– CET2:  the 66 kV power produced by the CET2 plant goes entirely to the Taranto steelworks.  Upon request, the plant also furnishes steam at 2,0 Mpa.  The installation has three smokestacks 120 meters high and 5 meters wide. According to the most recent data on the site (the Environmental Declaration verified by EMAS in 2016), the installation emits 3.046.760 tons/year of CO2.

– CET3: likewise, the CET3 plant furnishes the Ilva steelworks with 66kV electrical power as well as steam at 2,0 Mpa.   It has three smokestacks 60 meters high and 5.5 meters wide.  According to the most recent data on the site (the Environmental Declaration verified by EMAS in 2016), the installation emits 2.941.890 tons/year of CO2.

This makes the Taranto steelworks the number one CO2 polluter in Italy and places it among the top 10 polluters in all of Europe.