BAKO, ETHIOPIA -- In recent months, the Ethiopian government began marketing abroad one of the hottest commodities in an increasingly crowded and hungry world: farmland. 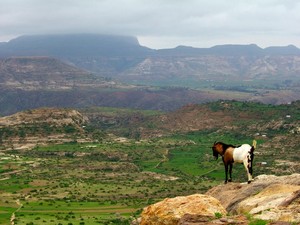 This impoverished and chronically food-insecure Horn of Africa nation is rapidly becoming one of the world's leading destinations for the booming business of land leasing, by which relatively rich countries and investment firms are securing 40-to-99-year contracts to farm vast tracts of land.

Governments across Southeast Asia, Latin America and especially Africa are seizing the chance to attract this new breed of investors, wining and dining executives and creating land-leasing agencies and land catalogues to showcase their offerings of earth. In Africa alone, experts estimate that about 50 million acres -- roughly the size of Nebraska -- have been leased in the past two years.

The trend is driven in part by last year's global food crisis. Relatively wealthy countries are shoring up their food supplies by growing staple crops abroad. The desert kingdom of Saudi Arabia, for instance, is shifting wheat production to Africa. The government of India, where land is crowded and overfarmed, is offering incentives to companies to carve out mega farms across the continent.

Increasingly, though, purely profit-seeking companies are snatching up land, making a simple, if somewhat grim, calculation. As one Saudi-backed businessman here put it, "The population of the world is increasing dramatically, so land and food supplies will be short, demand will be higher and prices will rise."

The scale and pace of the land scramble have alarmed policymakers and others concerned about the implications for food security in countries such as Ethiopia, where officials recently appealed for food aid for about 6 million people as drought devastates parts of East Africa. The U.N. Food and Agriculture Organization (FAO) is in the midst of a food security summit in Rome, where some of the 62 heads of state attending are to discuss a code of conduct to govern land deals, which are being struck with little public input.

"These contracts are pretty thin; no safeguards are being introduced," said David Hallam, a deputy director at the FAO. "You see statements from ministers where they're basically promising everything with no controls, no conditions."

The harshest critics of the practice conjure images of poor Africans starving as food is hauled off to rich countries. Some express concern that decades of industrial farming will leave good land spoiled even as local populations surge. And skeptics also say the political contexts cannot be ignored.

"We don't trust this government," said Merera Gudina, a leading opposition figure here who accuses Ethiopian Prime Minister Meles Zenawi of using the land policy to hold on to power. "We are afraid this government is buying diplomatic support by giving away land."

But many experts are cautiously hopeful, saying that big agribusiness could feed millions by industrializing agriculture in countries such as Ethiopia, where about 80 percent of its 75 million people are farmers who plow their fields with oxen.

"If these deals are negotiated well, I tell you, it will change the dynamics of the food economy in this country," said Mafa Chipeta, the FAO's representative in Ethiopia, dismissing the worst-case scenarios. "I can't believe Ethiopia or any other government would allow their country to be used like an empty womb. The human spirit would not allow it."

Few countries have embraced the trend as zealously as Ethiopia, where hard-baked eastern deserts fade into spectacularly lush and green western valleys fed by the Blue Nile. Only a quarter of the country's estimated 175 million fertile acres is being farmed.

Desperate for foreign currency, the government of former Marxist rebels who once proclaimed "land to the tiller!" has set aside more than 6 million acres for agribusiness. Lured with 40-year leases and tax holidays, investors are going on farm shopping sprees, crisscrossing the country on chartered flights to pick out their swaths of Ethiopian soil.

"There's no crop that doesn't grow in Ethiopia," said Esayas Kebede, who works for a new government agency that promotes agribusiness, adding that too many requirements on investors might scare them off. "Everybody is coming."

Especially Indian companies, which have committed $4.2 billion so far.

Anand Seth, director general of the Federation of Indian Export Organizations, described Africa as "the next big thing" in investment opportunities and markets.

So far, he said, the Ethiopian government has imposed few requirements on his company.

"From here," Rao said, "you can see the past and the future of Ethiopian agriculture."

From there -- a farm just west of Addis Ababa -- it was possible to see a river designated for irrigating cornfields and rice paddies; it is no longer open for locals to water their cows. Several shiny green tractors bounced across the six-mile-long field where teff, the local grain, once grew. Hundreds of Ethiopian workers, overseen by Indian supervisors, were bent over rows of corn stalks, cutting weeds tangled around them with small blades.

Many of the workers were children. The day rate: 8 birr -- about 70 cents.

"The people are very happy," said Rao, who will soon supervise a second farm spanning about 60 square miles. "We have no problems with them."

As a worker spoke to one of his supervisors, he whispered that the company had refused to sign a wage contract and had failed to deliver promised water and power to nearby villages. Supervisors treat them cruelly, he said, and most workers were just biding time until they could go work for a Chinese construction company rumored to pay $2 to $4 a day.

"We are not happy," said the man, a farmer-turned-tractor driver who did not give his name because he feared being fired. "I'm a machine operator and I make 800 birr [about $65] a month. This is the most terrible pay."

Rao said he had trained about 60 Ethiopians to drive tractors; others would learn to run shellers, and how to fertilize and irrigate land. If things work as they should, he said, Ethiopians will adopt the modern techniques in their own farms.

Along a muddy road leading to Karuturi farm, people said they were hopeful that might happen. But they were not sure how. Most said they were struggling just to buy government-subsidized fertilizer, much less tractors. In any case, Ethiopians cannot own land, instead holding "use certificates" for their tiny plots, making it difficult to get loans, or to sell or increase holdings.

"We think they might be beneficial to us in the future," said Yadeta Fininsa, referring to the new companies coming to town. "But so far we have not benefited anything."

Correspondent Emily Wax in New Delhi contributed to this report.