English
For many years citizens haven’t been told they were living in an environment contaminated by dioxin, a highly carcinogenic pollutant which can modify and damage the DNA

Taranto is a heavily polluted city in which the most important information have not been shared and discussed with the public. The dioxin was found in human blood and maternal milk

The most striking case is the one related to dioxin.

For many years citizens haven’t been told they were living in an environment contaminated by dioxin, a highly carcinogenic pollutant which can modify and damage the DNA.

What 's happened in Taranto is so serious that the judiciary has decided to put on trial not only the polluters but also those who politically governed the area. Local politicians have indeed had serious responsibilities that emerge from these points that we report as follows.

2001 Europe is unheard. The European Commission had warned since 2001 (http://tinyurl.com/nsfr2ml) that dioxin was a serious problem in Europe and that it was necessary to inform the population.

2005 First Peacelink alert. No action was, however, performed by the Italian national political and health authorities to comply to what was required by the European Commission. The population of Taranto was in fact advised of the presence of dioxins only with a public press release by PeaceLink in April 2005 which stated that “8,8% of the entire European industrial dioxin is in Taranto”. PeaceLink drew the dossier after consulting the European database. Up to 2005 no one knew that there was dioxin in Taranto. 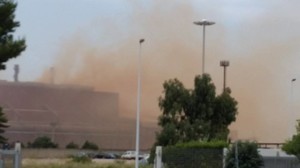 2006 An absurd limit to dioxin. In 2006 Italy acknowledges the Aarhus Protocol which sets the limit for dioxin emissions to 0.4 ng/m3. Yet while acknowledging the Protocol - Italy doesn’t implement the limit in its Code of Environment. Thus the limit remaining 250 times higher in Italy!

2007 A new alert from Peacelink. The institutions, despite the warning of 2005 was also spread through the regional Rai TV, did not instantiate any checks to verify the emissions of dioxins and to ascertain the severity of the situation. The controls over the Ilva plants started only in 2007 when PeaceLink issued a second explosive report on dioxin emissions. The his dossier documented that only in the area of Taranto Ilva emits 90.3% of the whole Italian industrial dioxin emissions as inventoried in the Ines (National Emissions Inventory and their Sources) register. As a consequence the Apulia Region was forced to start the first controls on Ilva steelworks’ dioxin emissions.

2007 More than expected dioxin emissions. The controls on Ilva (made by Arpa Apulia) have provided impressive data in 2007 which exceeded even those reported by PeaceLink in 2005.

2008 The dioxin increases. The controls made by Arpa were repeated in 2008 and have provided a worsening framework. Ilva emitted in 2008 172 grams of dioxin per year only from the E312 chimney. The industrial chimneys of Austria, Spain, Sweden and the United Kingdom emitted altogether 166 grams of dioxin in a year, according to the data of the European register E.T.O. (a database for public consultation).

2008 DIOXIN IS FOUND IN BLOOD AND IN BREAST MILK. In 2008, the dioxin was found in human blood (by the TarantoViva association) and maternal milk (by the Children Against Pollution association). Also in this case it wasn’t the institutions who conducted the research, but citizens’ associations who wished to raise the public's attention. The analysis was commissioned to a specialized laboratory.

2008 DIOXIN IS FOUND IN CHEESE. In 2008 PeaceLink commissioned a thorough analysis of the cheese made from the milk of sheep and goats grazing around the Ilva plant. The very expensive research, paid by the volunteers of the Association, gave a clear verdict: the values were three times higher than what the law states for dioxin and P.A.H. The National Health Authorities had previously made 72 analysis on foods with no particular results.

2008 THE JUDICIARY INTERVENTION. After the analysis PeaceLink issued an official complaint to the Prosecutor's Office. Thehe investigations that followed have confirmed the severity of the situation. Two thousand sheep and goats had to be slaughtered as a consequence. Many farms have been blocked and the shepherds went bust. The Region of Apulia was forced to approve - after a huge demonstration - an “anti - dioxin” law in order to adopt the European limits (0.4 ng/m3) set out in the Aarhus Protocol.

2011 DIOXIN IS FOUND IN MUSSELS. Something similar to the cheese happened in 2011 for the mussels. Even in mussels a concentration of dioxins and P.A.H. was found exceeding the limits of the law. Even in this case the discovery wasn’t made by the institutions but by an association: the Anti Dioxin Fund (Fondo Anti Diossina). Currently, and as a consequence, the cultivation of mussels in the Mar Piccolo Bay of Taranto is banned due to pollution by dioxin. For the same reason breeding and free pasture is prohibited in uncultivated areas within a radius of 20 kilometers from the industrial area.

In 2012, the judiciary presented the data of its experts: everything confirmed what associations had discovered. Hence a number of arrests involving polluters and politicians have started.

Note: ILVA production continues in violation of European law and the opinion of the Constitutional Court according to which the production should be compliant to the authorization
http://www.peacelink.it/en/a/40375.html
Parole chiave: taranto, dioxin
Licenza: Pubblico Dominio