The debacle in Afghanistan shows we should have listened to, not criminalized, Julian Assange

The founder of Wikileaks informed us long ago, with documentary proof, that US/NATO troops in Afghanistan were not winning the hearts and minds of the people; instead, they were making themselves hated. But the message went unheard and now the messenger is in prison awaiting judgment.
22 August 2021
Patrick Boylan 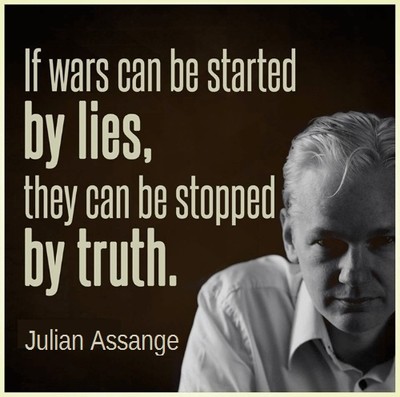 If wars can be started by lies, they can be stopped by truth.
Source: https://pics.me.me/wars-can-be-started-by-lies-they-can-be-stopped-5659034.png
Close

What explains the US/NATO defeat in Afghanistan? To a large extent it is due to the hatred spawned in ordinary Afghans by twenty years of foreign military occupation of their country. In the end, they preferred Taliban repression to Western oppression.

There are, of course, many pro-Western Afghans, mostly from the few big cities. Our TV news programs show us the horrifying images of thousands of them, desperately trying to escape along with the departing US/NATO troops. But our TV news programs do not show us the millions of ordinary Afghans, all throughout the country, spitting on the ground as those departing US/NATO troops pass by and who look to Taliban rule, some with trepidation, others with resignation, still others with relief.

The Australian journalist Julian Assange told us all that way back in 2010, on the web site Wikileaks that he created to publish documents of public interest leaked from military and government sources. His site illustrated how – by simply “following orders” – US/NATO troops were committing continual war crimes against the local population and alienating them, as happens in any occupation. Because no population willingly submits to an occupation, and therefore dissidents always have to be weeded out by rounding up and torturing countless suspects, whether guilty or not, and bombing entire neighborhoods suspected of harboring guerrillas, whether they do or don’t and even if they are densely populated with civilians. Thus, in the final analysis, the real war crime in any unjust occupation is the occupation itself, which makes all this inevitable, while the real war criminals to be prosecuted are, above all, those who ordered the occupation in the first place.

And these were the people that Julian Assange denounced most on his site, whether they be Republicans or Democrats, Donald Trump or Hillary Clinton, Pentagon generals or CIA directors. They did not forgive him for doing so.

Countless smear campaigns were launched against Assange. Payments to sustain his website were blocked. The Justice Department demanded his extradition from the UK in order to try him under the Espionage Act and thus sentence him to 175 years of prison. (Assange is currently under custody in Belmarsh prison, London, awaiting a UK High Court decision on the extradition request.)

“Yet if we had only listened to what Assange was telling us, we could have stopped the war sooner and thus saved the lives of thousands of Americans and tens of thousands of Afghans,” say the activists of the Rome-based peace group U.S. Citizens for Peace & Justice.

“Indeed, President Biden claimed, in his August 16th address, that we should have stopped the war in 2002, when the anti-terrorism mission was accomplished! To continue to occupy Afghanistan after that with the pretext of ‘nation building’, he said, was only asking for trouble – as the facts have shown. Especially the gruesome facts documented by Julian Assange on his Wikileaks site. Had they been reported fully by the media and discussed publicly by our political leaders, the American people would have ceased to put up with the occupation long ago,” say the activists.

“That’s why we have to step up for Assange now,” they conclude. “How? By asking Biden to drop the absurd espionage charges. And also by asking the UK High Court to reject the extradition request. We have created a web page with suggestions on how to do just that, entitled Don’t shoot the messenger!”

Besides a planned rally for Assange in Rome next month, there will be “Don’t shoot the messenger” demonstrations in the UK and worldwide in the weeks preceding the extradition hearings in London, set for October 27th and 28th. Indeed, not only pacifists but also many rights groups such as Amnesty International will be out on the streets to make the point that it is not Assange but Freedom of the Press that is on trial. Prosecuting Assange is blatantly an act of intimidation, they say, aimed at getting investigative journalists everywhere to close an eye to any U.S. war crimes or government wrongdoing they may uncover. For if they don’t, the U.S. Justice Department will get them, no matter what their nationality is or where they live (Assange is an Australian citizen and ran Wikileaks from Iceland and the UK).

Technically, next October the British High Court must decide on the validity of the temporary suspension of Assange’s extradition, granted last January by UK judge Vanessa Baraitser on the basis of a psychiatric evaluation of Assange’s current mental health. If indeed the suspension is invalidated, Assange has, as a last resort, an appeal to the UK Supreme Court or possibly the European Court of Human Rights. If that fails, he will be shipped off to the United States for an inevitable life-long jail term.

It should be noted that there is no investigation underway of the alleged war crimes that Assange has reported on as a journalist, nor are there any plans to incarcerate those who allegedly committed such acts or those who ordered and ran the illegal occupation to begin with. Only the messenger is to be prosecuted.