Screening of “Mittal, the hidden face of the Empire”, by Jérôme Fritel (prod. CAPA Press, Arte TV France, RTBF). In the presence of Edouard Martin.
Presented and moderated by Alessio Giannone alias Pinuccio.

By popular demand, following the September screening at the Rione Tamburi, we invite you again to the projection of “Mittal, the hidden face of the Empire”.
Edouard Martin - a central figure of the documentary by Jérôme Fritel – is meeting the public for a debate after the screening, which will be moderated by Alessio Giannone alias Pinuccio. 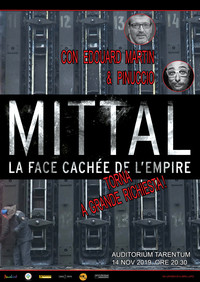 Locandina Mittal, il volto oscuro dell'impero
Autore: Fulvia Gravame
Fonte: Fulvia Gravame
Chiudi
https://www.peacelink.it/calendario/event.php?id=9751
Former steel worker and syndacalist of CDFT, Martin has been the very icon of the working class struggle on the ArcelorMittal sites in France. Then he’s been MEP in the Commission for the Industry, Energy and Research between 2014 and 2019. Martin is engaged in the fields of work rights and of the research on renewable energies, green hydrogen, decarbonisation. He visited Taranto in 2014 in the frame of an European Report commitment.
“Mittal, the hidden face of the Empire” explores the behind-the-scenes of the world leading steel producer through the biography of the tycoon Lakshmi Mittal. The film analyzes his economic strategies, giving voice to his close collaborators and CEOs, besides a number of economists, financiers, industrialists, MEPs, union officiers, journalists. It explains the company’s pyramidal structure, which is mantained through the majority share of the Mittal family. It shows the systematic acquisition of old steel plants, which began in the post-communist Eastern Europe, the 2006 hostile OPA against Arcelor, bringing to its current dominant position in Europe. The liason with the world of finance as well as politics. The director Fritel accompanies the spectator through an impressive and dizzying rise, which raises crucial questions on the present as well as on possible future scenarios.